Back to Main Navigation

What's Next for Restaurant Technology

This article was originally published by Restaurant Business

Robots, ghost kitchens, consolidation and the metaverse are the four developments we’ll be keeping a close eye on in 2022.By Joe Guszkowski on Dec. 21, 2021

2020 may have been restaurants’ great technological awakening, but it was also just the tip of the iceberg in terms of how tech will transform the industry. What seemed innovative just a couple of years ago, like mobile ordering, is now table stakes in the new, digital world.

So what’s next? As we look ahead to 2022, here are the four areas I’ll be watching most closely and my expectations for each.

I predicted last year that restaurant robots were ready to take a step forward in 2021, but even I was surprised by the progress they’ve made—not only in the kitchen but also on the roads and sidewalks and even in the air.

I expect even more development in ’22, particularly in the delivery space after a lot of capital infusion and the entry of big players like Uber Eats and DoorDash.

In the restaurants themselves, I’m eager to see how Sweetgreen starts to implement the technology from robotic restaurant Spyce, especially now that it has investors to satisfy. How it fares in that journey should provide a lot of lessons for the rest of the industry.

In 2021, we saw the emergence of a hybrid model that emphasizes takeout but also includes nods to the traditional restaurant format, with prominent storefronts and even dining rooms in some cases.

In 2022, I’m expecting ghost kitchens to start adding more automation in the kitchen and in the delivery process in a bid to boost efficiency. (Think a robot making fries for multiple brands at once.)

And I’ll be watching Inspire Brands and Chick-fil-A—two restaurant companies that are opening their own ghost kitchens—to see how a more vertically integrated model might work.

This already started happening in 2021 as tech companies fresh off big funding rounds used that capital to buy others. They felt added pressure from restaurants, which have been asking for more fully integrated systems to ease their tech headaches. I only expect this trend to continue in ’22.

Toast, which went public with an $870 million IPO in September, seems like a good candidate to make some deals as it looks to become a go-to provider for restaurants’ technology needs. I would also expect to see more large restaurant chains following the lead of Yum Brands and buying tech companies rather than trying to build it themselves.

What is the metaverse? In brief, it’s a more immersive version of the internet, in which the digital and physical worlds become intertwined with the help of technology like augmented and virtual reality, geolocation and the Internet of Things. Think of the metaverse as an interactive, digital layer on top of the real world that could be accessed by putting on a pair of AR glasses. It could have serious implications for how restaurants market and sell food. 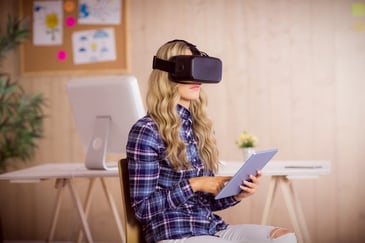 The metaverse (aka Web 3.0 or the spatial internet) is still in its infancy, but restaurants have already begun to experiment with it. Chipotle in October created a virtual restaurant in the gaming platform Roblox, an immersive online world that has drawn comparisons to the metaverse. Users could visit Chipotle’s Roblox restaurant to get a code for a free, real-life burrito while also scoring digital Chipotle swag for use in the game.

Given all of the real-world problems restaurants are dealing with right now, the concept of a second world may not sound all that appealing. Most experts believe a fully realized metaverse is still years away, but given big investments from companies like Facebook, it’s something businesses are starting to pay attention to now. I’d expect innovative chains with younger followings (like Chipotle and Starbucks) as well as the big delivery providers to start wading in further in 2022.

Let’s talk and see how we can help your restaurant operations improve and add thousands to your bottom line.